$33 for a barrel of oil will return to normal?

In the last couple of months the whole world was watching the rapid decline in oil prices. Many economists say that it will give impetus to world economic growth, but also should take into account the negative impact.

The decline in oil prices also means the loss of many jobs. In the U.S., for example, will be destroyed 40% of jobs in the energy sector created since 2009

In addition, many of these jobs are characterized by high wages, and this leads to the fact that in some parts of the country increases consumption and therefore employment in other sectors of the economy.

Of course, the main problem in the market is the imbalance of supply and demand.

The development of the shale gas revolution in the last five years has been very rapid, but the decline in demand for petroleum products now involves excess production. This leads to the collapse of prices.

After will begin to show the negative effects of the decline in oil prices, any positive effects from lower gasoline prices for consumers will be quickly nullified.

Famous American investor Thomas Boone Pickens believes that the current decline in oil prices is nothing more than a return to the historical norm.

For many years the difference between the value of WTI crude oil and natural gas prices were about $8. The correlation was very high.

The correlation between oil prices and gas 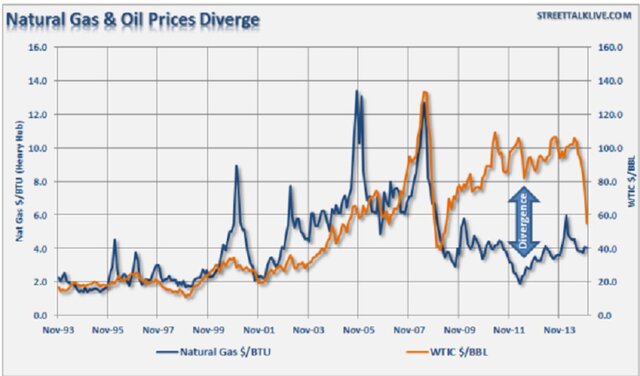 The divergence between oil prices and gas was implemented in conjunction with action by the Federal reserve, which lowered borrowing costs enough to Finance the exploration and extraction of shale deposits.

As you know, the oil and gas sector is capital intensive. The drillers took a phenomenal amount practically for free, renting and storm wells, installing production equipment and creating infrastructure.

Even now, when the debt load is high and the oil price is not very favorable, the drillers need to replace old wells. Moreover, they have to increase their number to show at least some growth.

This is partly financed by junk bonds. Because of favourable conditions created by the fed, the share of "junk" bonds issued by oil and gas companies, increased from 9.7% in 2007 to 15% now.

If prices continue to decline, returning to its historical ratio with the gas, this can obviously be a blow to oil and gas companies working with slate.

Now the cost of natural gas averaged $4 per million British thermal units. If we assume that this level corresponds to the normal balance of supply and demand, oil prices should fall.

When extrapolating the current price of West Texas Intermediate on the cost of gas, in 2016 prices are expected to fall to $33 per barrel to return to the historical difference of $8. 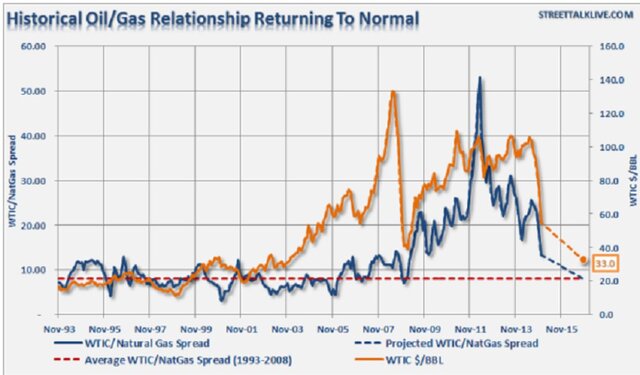 Pickens notes that the main issue in return prices to equilibrium are deflationary forces. Although the fall may also be linked to a rapid reduction of energy securities in portfolios around the world. Roughly speaking, they will be selling them again, which will lead to a new reduction in prices.

The earlier fall in the cost of oil by 50% compared with the peak we had in 1985-1986, oil Prices remained at those levels until the turn of the century.

The change in the balance of supply and demand might keep oil prices at low levels for much longer than what most analysts. Given that the rehabilitation of the energy sector is largely dependent on the pace of domestic economic recovery, which further fueled activity in the largest sectors, including oil and gas, such results in the long term may slow down economic recovery.