The price race to the Euphrates Material posted: Publication date: 17-02-2018
Russian citizens were killed in Syria trying to retake gas field, says the press. Why a cubic metre of gas in a strange land had to give their life figured out "Fontanka".

Armed men, among whom, according to press reports, were our compatriots killed in the Syrian province of Deir ez-Zor on the East Bank of the Euphrates during an air strike by the US on the night of 7 to 8 February. They are called the soldiers of the Syrian army, then military advisors, then soldiers of the so-called private military company. It is known that they tried to attack one of Syria's largest gas fields, wrested from the (banned in Russia as a terrorist organization), Pro-American coalition.

The most common version, the attackers wanted to take control of the oil and gas field Conoco (Conoco). It is called one of the richest in Syria. Once it was opened, the us energy company, and called his name. There's also Conoco Phillips built a gas processing plant.

Deir ez-Zor – Eastern province of Syria. It shares borders with Iraq. The government of Bashar al-Assad has lost control over these territories in 2012, they took the Free Syrian army and the opposition. And in 2014 it knocked out the "Islamic state". In most oil-rich Syrian province in the hands of ISIS militants were ten mines and processing plants of oil and gas.

To assess the potential of the Syrian fields helped "Finance" the Abu Sayyaf – "main oil" ISIS killed by US special forces in may 2015. His paper and tables in Excel, captured by the U.S. military, learned the newspaper the Wall Street Journal. It turned out that for 6 months of income is from the sale of hydrocarbons made 289,5 million dollars. While ISIS "dumping," selling oil at prices two to two and a half times lower than the world. The magazine has estimated that if resources from the same deposits were mined and sold to legitimate companies, they would earn not twice, but hundreds of times more. Workers employed in the oil sector, ISIS was paying 160 to $ 400 per month. The average salary in Syria is $ 50.

Now almost in the city of Deir ez-Zor, more precisely – the Euphrates river is the boundary. On the Eastern Bank of the territory wrested from the Kurds and forces of the Pro-American coalition. On the Western – government-controlled Bashar al-Assad of the earth. The coalition, made up mainly of Kurds, moving from the Northwest, the Syrian Arab army from the South-West side of Palmyra. On the way, they ousted ISIS – but who had the moment of "meeting". It had: it was a race, where the prize has served the oil and gas fields reclaimed from the terrorists. "Met" the two forces at the Euphrates.

It so happened that on the East side that is under the control of the opposition, represented mainly by Kurds, and its us allies were almost all fields of Deir ez-Zor, including the fact that the expert of Institute of Middle East Anna Manafova called "the pearl of the Syrian oil industry" – al-Omar. The Financial Times wrote that it is fighters with their artisanal methods of production squeezed by 9-13 thousand barrels per day. Oil was easy – my dear, I sold her to ISIS at $ 45 per barrel. It is at that time when average prices reached a hundred. On another field, the al-Tanak, they received more, up to 17 thousand barrels per day. But oil there is worse on quality, it sold for $ 40. Before the war each of these oil fields, the Syrians produced about 30 thousand barrels per day.

Among the fields, which in the end of the opposition, has and gas "pearl" – Konoko. This is the third in Syria, the field's proven reserves, before the war there were produced a day and two million cubic meters of gas. But the main value of Konoko even no reserves, and the gas processing plant, built by the Americans in the 2000s. Unlike other infrastructure, which the terrorists during the retreat destroyed, it was preserved in good condition. 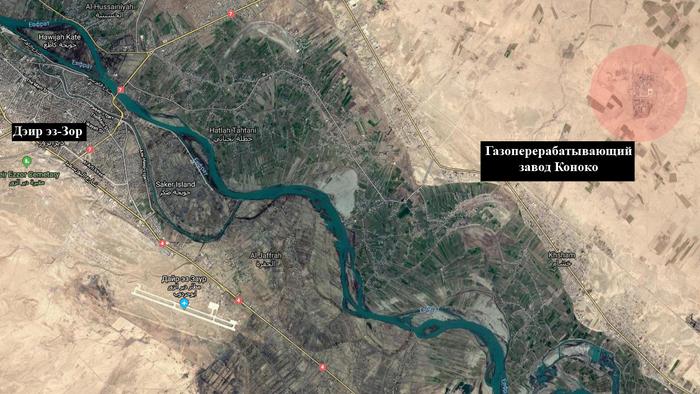 As already wrote "Fontanka", the government of Bashar Assad and the Russian company "Europolis" signed a Memorandum under which the latter assumes the release of the captured ISIS oil and gas facilities and their subsequent protection. For this she is owed 25 percent subsequently extracted resources. "Europolis" is a company very closely related to Yevgeny Prigozhin, to him, as was shown by the "Fontanka", linked to the so-called PMC Wagner. If fighters Wagner participated in the "race" to the Euphrates, hurrying to clear ISIS from more and more fields the user can understand.

Won the "race" power of the Pro-American coalition. Peresadovka fighters on the Euphrates, to pass did not, and they managed to release only one field in the West Bank – al-Taim. It's pretty scarce. The ISIS was less than 600 barrels per day.

If the attack of February 7 was really an attempt to intercept the Kurds Konoko, it seems, not the first.

The field Konoko, what would be a "pearl" it was for Syria, from the viewpoint of major energy producers, it was not. But for the Syrian opposition, it could serve as a bargaining chip in negotiations with the government. For the Kurds – the strongest card in the discussion of autonomy. To government forces is a source of income to establish control on site. For possible "liberators according to the Memorandum," a quarter of such income is very good. These participants had an incentive to win Conoco, and won – to keep.

The Kurds repulsed the ISIS Konoko 23 September last year. A day later, according to The Washington Post, representatives of the Pro-American coalition has accused Russia of air strikes on the positions of the Kurds in Eastern Syria. While the coalition struggled to achieve in the region of ISIL, showered reproaches that Russian warplanes targeting not terrorists, and fighters of the opposition forces. "In three places in the province of Deir ez-Zor, including at a major gas field, captured on the eve of the action" clarify the place of the newspaper. They were talking about Konoko. This was the first attempt to get it.

In response, Russia has accused the United States of duplicity and recalled the death of Lieutenant-General Valery Esipova. Recall that the Russian officer was killed in Deir ez-Zor in those days, September 24, but killed his mortar fire from ISIS, the opposition and the United States to his death had no relationship. However, Deputy foreign Minister Sergei Ryabkov said that his life is "the price paid in blood for American hypocrisy." Attacks on the Conoco he didn't say a word.

Syria was never a major exporter of oil and gas. They were enough to ensure its vitality and little trade with its immediate neighbors. In the last prewar year, 2010, according to the International energy Agency, the country consumed energy of 21.7 million tonnes of oil equivalent, and produced 27.7 million tons. That is, it is seen that the excess that went on sale were modest. However, according to orientalist Anna Manafova, for a small Syrian oil accounted for about 20 percent of all state revenues. But production each year falling before the war: due to sanctions imposed on the Assad regime after allegations of use of chemical weapons, the oil industry lacked the technology. As for gas, it all went to their own needs. Since 2008, Syria had to import it from Egypt.

Now the infrastructure of the oilfields, pipelines, refineries destroyed by militants "Islamic state". The field Konoko is cut off from consumers: destroyed the gas pipeline linking it to the province of HOMS. And, conversely, from HOMS, which is now under the control of the Assad government here did the electricity, and if the parties fail to agree, the plant will have to find another source. But still the principal is not what is on earth, and that in the bowels. How much could be drawn from Syria skilled miners, armed with the right technology?

Analysts British Petroleum has estimated proved reserves of oil in Syria in the 0.3-0.4 billion tons. This is 0.2 percent of global reserves. Approximately the same situation with gas: 0,2-0,3 trillion cubic meters – 0.15 per cent of global reserves. In 2010, the government of Syria reported that in the country there are deposits of oil shale – about 50 billion tons. However, to prove it did not, the war began. In the early 2000s in the Levantine basin off the coast of Israel and Cyprus discovered oil and gas. Syria decided to start geological exploration on the shelf in his part of the basin, and in December 2013, the government of Bashar al-Assad has signed a contract with the Russian company "Soyuzneftegaz." It was assumed that the well drilling on the area of 2190 square kilometers. But work stopped, unable to find something. The company announced on 29 September 2015 and 30th, we will remind, Russia began its military operation in Syria.