"Putin has made a smart move": the financial world is preparing for the big shocks Print version Material posted: Publication date: 04-09-2018
These financiers (not the "creative financial management", who dreams about trading, and talks from high tribunes about all sorts of bitcoin) — people professionally careful and conservative.

Therefore, in the West, in contrast, by the way, our "liberal expert community", the news Agency Bloomberg that Russia in July increased their gold reserves, was received with respect. "Putin made a very smart move, — said, for example, Jim Rickards (Jim Rickards), author and editor of the Bulletin "Strategic intelligence". — Russia financial war. She dumps the us currency and buys gold. This protects it from freezing its dollar-denominated assets and sanctions". Although actually to reduce these operations the Russian Central Bank in the market of precious metals only to the fear of sanctions, in General, a bit serious. Judging by the fact that the strategic gold reserves of the Russian Federation replenished consistently and for a long time, there is no "immediate need" it still does, can't explain.

To quote the recent IMF report.

"The Russian Central Bank additionally purchased 26.1 tonnes of gold, bringing its reserves to 2170 tons. Thus, the total value of the Russian monetary gold reached 77.4 billion at the end of July," according to data from the IMF's last official report of the organization, which leads the Agency.

But the message that the Russian regulator in the face of the Central Bank of Russia will buy foreign currency on the domestic market, from 23 August to late September, is the solution albeit quite significant, but clearly operational. According to the official version, thus the Central Bank of Russia decided to do just in order to reduce financial volatility and increase the predictability of monetary authorities. But something tells us that it's not only that. And let the Finance Ministry immediately announced that implementation of the plan of purchases of foreign currency in the framework of fiscal rules will continue, it is worth remembering that further purchases of us treasuries also promised. 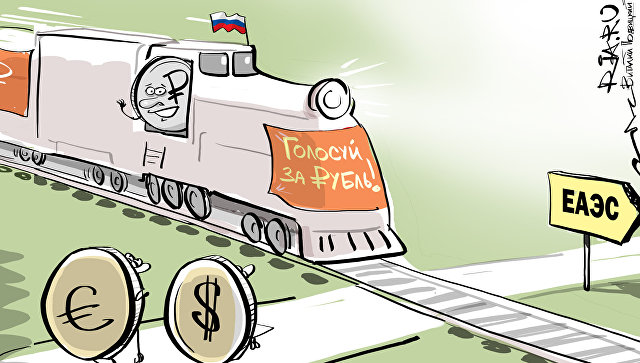 © RIA Novosti / Vitaly Podwyzki
In fact, here's the thing. Our American partners are currently not only us but the whole world is afraid of its unpredictability. The Russian government also understand this. And the statement of the Minister of industry and trade Denis Manturov about the fact that Russia now considers the transition to settlements in national currencies as a response to the new sanctions the United States can hardly be attributed exclusively to the "initiative" of the Minister.

These words, by definition, expensive. As a thesis that will continue to reduce dependence on foreign technological equipment.

Awareness of upcoming tectonic change in global markets comes not only to a number of serious Russian economists, but also to their European colleagues.

So, for example, understanding that the EU should establish an independent analogue of the interbank system SWIFT exchange of information (as stated in an interview with Handelsblatt, the German foreign Minister Heiko Maas), is also unlikely to have arisen as a "piece of propaganda" in a trade war with the United States. Serious people, such as the Russian Minister of industry and trade or the head of the German foreign Ministry, such things without a thorough preliminary study and approval. just do not say.

It is, in the end, neither more nor less than the "necessity to strengthen European autonomy by creating an independent US payment channels." And if six months ago, such things could not afford to say even a little "marginalized" (from the perspective of Washington or Brussels) skeptics, but now this has directly urged the head of the German foreign Ministry.

In General, everything is very serious.

The world (at least in the sphere of the global economy) is obviously entering a period of strategic instability. And can get out of it in a completely different configuration, at least the financial and economic system. And in this regard, the reformatting of the gold reserves of the Russian Federation and massive purchases of gold by the Russian Central Bank seem quite understandable. We, by the way, this is not alone: a very serious effort in this field is taking, for example, and even China. And indeed in its present form until recently seemed absolutely unshakable Bretton woods system begins to seem quite fragile.

No, the question of "immediate collapse" of the global reserve currency now, thank God, is not necessary. But in some 1986 and the Soviet Union seemed absolutely unshakable stronghold. But the Soviet Union was a system much more serious than any dollar standard. Anyway, as we know from the classics, sometimes the "rookery" is doomed to blaze with six points, because the tenants at some point began to prepare to fire.