Economists of the Keynesian school argue that a deflationary currency whose purchasing power tend to increase over time relative to other goods, will have a negative impact on the economy, because it creates a financial ecosystem that will stimulate economic actors to save money than to invest it in creating jobs and companies.

They believe that a deflationary currency encourages people to use the strategy of "buy and hold" because of confidence, then the currency will be worth tomorrow more than today. The tendency to accumulation, in turn, will lead to lower interest rates and increase the number of long-term investments. This reduces the velocity of money in the economy, or the rate at which money change hands. A healthy economy characterized by high speed of monetary circulation, and consequently its reduction is undesirable.

Supporters of the Austrian school of Economics does not believe deflation is a negative phenomenon, arguing that it is the place to be at all stages of production, and entrepreneurs get benefits from it. As a result, profit margins remain unchanged, changing only the numeric values. In other words, in a deflationary environment, the price of goods and services is falling, but at the same time, and proportionally decreases the cost of producing these goods and services. It turns out that the total profit remains the same.

Bitcoin with confidence can be called a deflationary currency, as its money supply cannot be expanded. Let's try to understand what this implies.

Deflationary currency can to some extent stimulate its accumulation, however, it also creates the effect of the delayed gratification. Do the work now and saw the fruits later. Opposite inflationary currency encourages immediate and thoughtless and, sometimes, not desired spending. Deflationary currency encourages to do the work of today to tomorrow already earned money work for you. Thus, the purchasing power of money received for past work will grow, the sooner you set to work and the more you do, the greater your benefit. With inflationary currencies, such an incentive is absent, as the purchasing power of your labor is steadily declining with the passage of time. USA example, if we take as a basis the official rate of inflation, in 20 years the money earned would have lost about half their value. 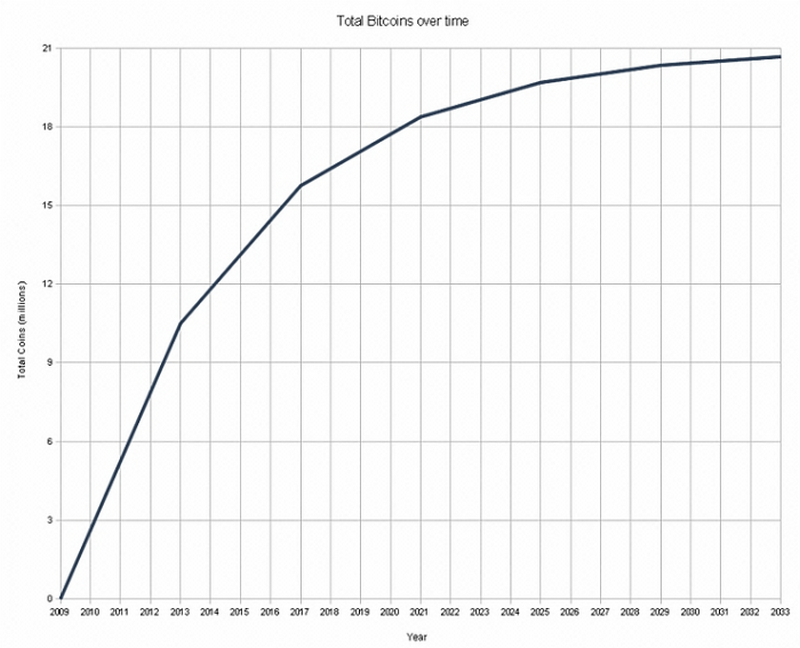 Bitcoin users (like any other currency), even the certainty that the purchasing power of their money will grow, will continue to spend a portion of their funds for food, shelter and other goods necessary for basic survival. No one will put a priority on capital growth at any cost, rejecting their essential and vital needs. Russ Roberts, Professor of Economics at George Mason University, says:

"The presence of a control system for increasing the money supply is what separates Bitcoin from any other Fiat currency".

The consequence of this is likely to be slow and steady deflation against the backdrop of slowing growth in the number of bitcoins in circulation. And, Roberts said, "in the modern economy, it is considered a very destructive practice, mainly because no one is waiting." But, in his opinion, the negative impact of deflation is not applicable to an economy where it is expected:

Deflationary currencies do not dominate, because as such they will increase the cost of debt, and this is one of the reasons why the money supply-supported debt will not be sustainable in the long term. Unstoppable deflation, or, as it is called, a deflationary spiral will lead to the collapse of the economy under the current system of fractional reserve banking. However, in the Bitcoin system, money is not debt but an asset.

The velocity of monetary circulation

Looking ahead, let's imagine a situation, what is Bitcoin economy and its technology is already well represented in society. In this case, we see that the velocity of this money far exceeds the speed of circulation of national currencies. All due to the fact that implemented Bitcoin payments method has a very low "coefficient of friction", which strikingly distinguishes it from paper money. That is what makes high speed transactions. The beauty of this low-friction method of payment in that it eliminates the delay between time of payment and after confirmation of receipt of payment. No more need to wait 2-5 working days, there is no risk of blocking of the account or the human factor. With this increased velocity of monetary circulation, the backward economy will get a reliable and fast "financial pipeline" to the economies of developed countries, and it will help first to strengthen its position and to emerge from stagnation. This "pipeline" for transactions will lead to the fact that business can be conducted "at the speed of thought". Bitcoin will accelerate monetary circulation, providing the possibility of instant transfer of property rights (value) via digital channels without any bureaucratic, technical, political and any other conceivable delay.

Economic principles built into the Bitcoin ecosystem is fundamentally changing the rules of the game in financial and many other fields. The architecture of Bitcoin is a deflationary currency with a limited money supply of 21 million units. Moreover, the arrival rate of the money supply in the system are known in advance. For any currency of the 20th century was not known the rate of money supply with such stunning accuracy. Perhaps the most important property of Bitcoin is that its money supply is not based on debt. Bitcoin, in contrast to the current Fiat system, is a marketable asset. Together, these factors make Bitcoin a revolution in the field of Finance, and stage the gradual adoption of Bitcoin by the masses will take place very rapidly.