What will the world after the coronavirus: the bankruptcy of whole countries, change of borders and falling wages Print version Material posted: Publication date: 27-03-2020
A famous writer of prognostic Sergei Pereslegin in an interview with "Komsomolskaya Pravda" told about the consequences of the pandemic.

IT IS A FINANCIAL OPERATION

- Today, some world leaders have called coronavirus hardly the worst threat since the Second World war. After her world has changed dramatically. What awaits us after the pandemic?

- Let's first answer the question, what is a coronavirus. Not epidemiological, but from a social point of view. It is obvious that in reality is no epidemic, and especially the pandemic of this virus is not. The number of people dying from a simple flu, is much higher. No comparison with the rampant "Spanish flu" in 1919-1921 or the Hong Kong flu of 1967, not even close. I'm not talking about smallpox and plague. There is a striking discrepancy between the scale of the threat and magnitude of response. Have to enter that in itself is a threat is irrelevant. Important answer.

- What does coronavirus, if not kills like the plague, but drives the whole country into quarantine?

- He draws a line under globalization. Of course, we are promised that when the pandemic is over, we all will return to normal. But nothing ever on the same place will not return! And the epidemic will never end. The outcome of this, you will see the following. Because in fact, its basic task is to reformat the world in order to change the structure of financial flows.

Today there is a global redistribution of capital and not a mass disease. As you know, now very much ruined. The small airlines, tour operators, hotels, theatres, cinema circuit, the scope of services of the expert community. And all that will go bankrupt, be bought up for pennies and then sold for big money. This is a purely financial operation. This will ravaged the whole country.

- Russia can and will take the hit, but he will be very strong since the low price of oil some time last. Moreover, all predict the economic depression, and quite long. Such a crisis is the best way to redeploy the industrial assets.

The writer of prognostic Sergei Pereslegin.

- For a long time there is a struggle between two forms of capital, industry and banking. In simple terms, the first from a political point of view is a group of trump, the second Clinton. Now this fight a third force intervened. It is large funds that previously did not conduct banking activities. Now their task is to translate into money for both industrial and banking.

Usually, the world of Finance the redistribution is done through war. And what we see now is the imitation of global war. Through the epidemic. But the result will be the same.

The second aspect is a catalyst that dramatically accelerate the transition to the remote mode. This is an opportunity to retire or retired professors, teachers, coaches - teach from home. And due to this significantly reduce the cost of wages for these categories of people.

Now many people are switching to "udalenka". Maybe someone will then even refuse to rent offices... Savings after all.

- You are absolutely right. This process was before, but it slowed down, for example, with the help of trade unions. "Udalenke" will quickly lead us to work in the virtual world. And all these technologies are controlled by USA, more precisely, a few American corporations. Thus there will be a redistribution of Finance in favor of this small group.

And because by itself, the coronavirus this has nothing to do, it is easy to understand that the victory over the disease does not change. In fact we are talking about the incredible robbery of the world in scale, which was not very long ago. 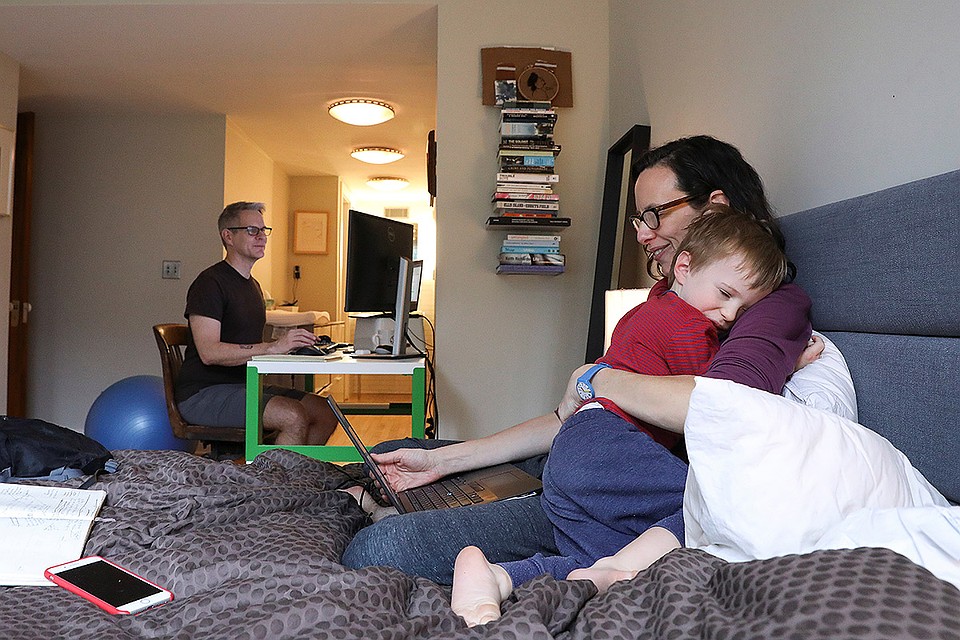 Pandemic is a catalyst that dramatically accelerate the transition to the remote mode.Photo: REUTERS

- And who will suffer the greatest losses?

- All of us. Small private producers working population - the taxpayers. When you say, what a fantastic amount of daily lose the richest people of the planet, please remember that the billionaires have nothing to lose, otherwise they would not be billionaires. Whatever they lose will shift to us.

Overall, therefore, the world will fall in the standard of living.

Who will lose more?

- Most formal casualties China. Just because it is the "workshop of the world", and most industries will be either shut down or reformatted. But there used to not very high standard of living. And its fall will not be seen as a disaster. 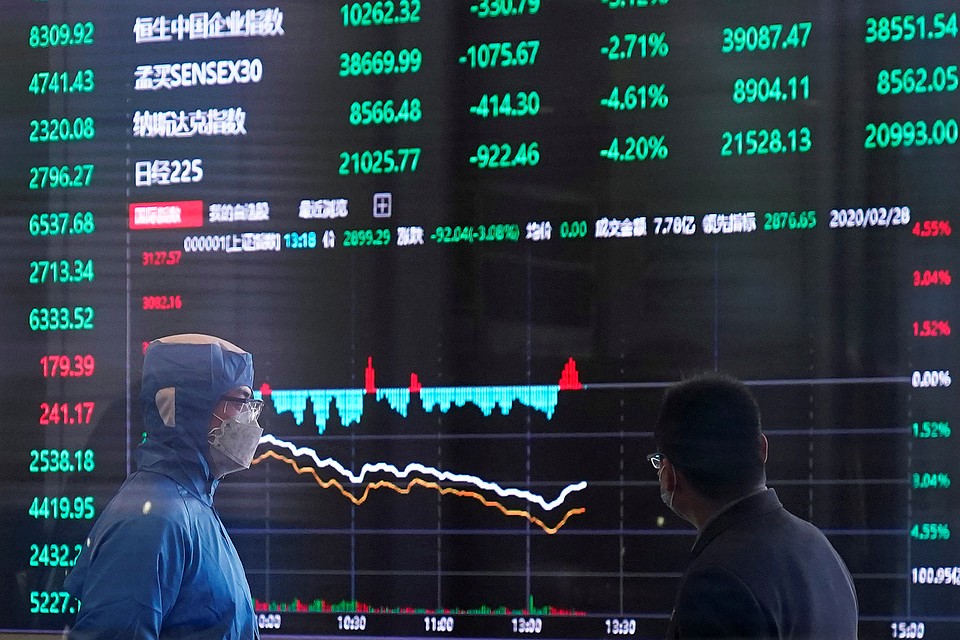 Traders at the Board of the Shanghai stock exchange watching the drop in prices.Photo: REUTERS

Europe on the contrary are not accustomed to the fact that their consumption may be severely limited. And let them fall is not as high as in China, but much more painful.

In Russia seriously discussed the theme of "new 90". The experience we already have, and he does not promise us anything rainbow. But before the crash we get. In short, the crisis will be felt hardest in Europe, will hit more on China, and Russia - in the middle.

- What about the Americans?

- The United States, according to the tradition, not only will not be affected by the crisis, but on the contrary - wins. Country-hegemon, if the authorities are not complete idiots, always has the opportunity to shift their problems on someone else's shoulders. And trump does not look like a complete idiot.

- What are the implications of the coronavirus we waiting for?

- Reduced mobility. Will require help that you do not have this virus, the virus... As before, leaving from Union, you need a lot of papers confirming political loyalty, now you will need documents about biological well-being.

Over the past decades people have developed the habit to go, then at the beer festival in Munich, then to a music festival somewhere in the Baltics or in Amsterdam. A huge number of people travel to hang out, listen to your favorite music, these habits will be dealt a heavy blow. This area will begin to strictly control under the guise of exclusively medical purposes. 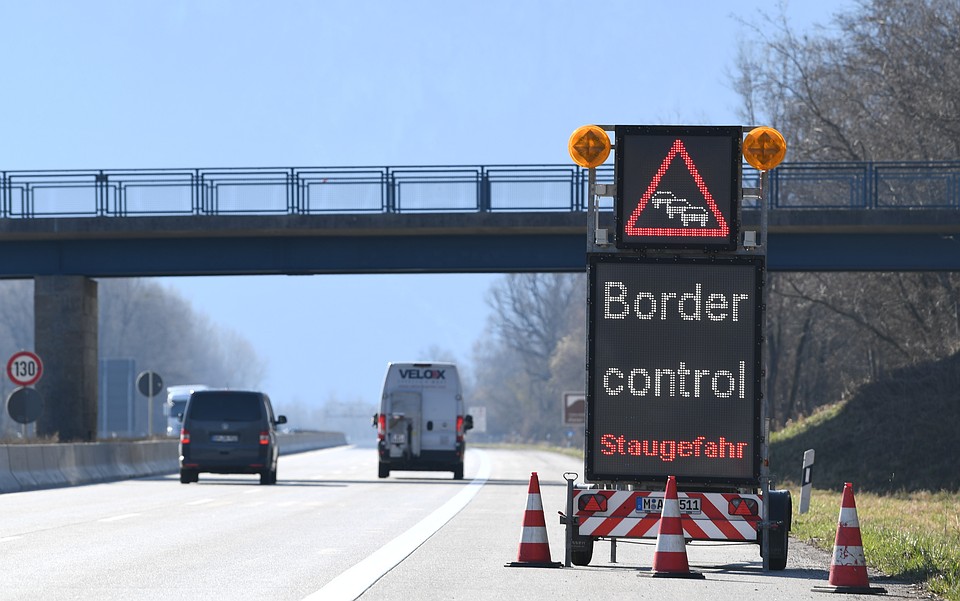 Because of the epidemic neighbors in the "common European house" urgently blocked the border.Photo: REUTERS

And flows of migrants so finally put under control?

- And this, too. Trump is a smart man, and is therefore honest. He always said that his basic task is to protect the labour market of America from the Mexican and other migrants. With him on the issue of fighting. Now useless to fight, because this is not politics trump but a necessity caused by the epidemic.

Other countries, too, will go to these limitations. Reduced labor mobility. In this case, as was thought earlier, should rise wages. But large-scale layoffs associated with the transition to "udalenka" and the reduction of production in General, will reduce labour mobility with a reduction in wages. The whole point of the situation. Biological threat covers pure economic action.

WE ARE WAITING FOR POGLOBALNEE THE WORLD

- The relationship between people will change? Between the two countries?

- Between people - in any way. Personal contacts remain. As for intergovernmental relations, there will be a transition from global to postglobal the world. In what form it will, is still unclear. Russia could win by taking one of two strategic decisions. The first is to generally ignore the epidemic. Secondly, we are of course concerned, but not close to all. In the end, we have with Belarus - Union state. Friendly Kazakhstan again. Need to allocate space, which will have a different attitude.

We seem, as long as we choose the third way...

- However, in the Russian government, quite clever I must say, sooner or later, I hope will prevail this second point of view - creating a custom security zone. And this is one of the possible variants of postglobalization - form creating regions where the inside has some mobility, and the output from it is difficult. From the standpoint of the fundamental interests of Russia, which acts as a transport corridor, the epidemic is very unfortunate. The most profitable new world would be a version of "a Divided country, common infrastructure". Total traffic flows, the nodes. But this principle is zeroed by the epidemic.

- It turns out, the border States will change conditionally, standing on the line of interstate formations?

Absolutely. The coming transition from the single market and the single currency, to regional markets and currencies.

POWER WILL SHIFT FROM STATES TO CORPORATIONS

- It is believed that the coronavirus delayed the Third world war that is already palpable hung...

- He canceled it. I needed it for the same purposes. But studies have shown that war does not solve the problem at scale. So it was canceled. Throughout human history war was really possible to solve such pressing sores. Now comes the understanding that the risk from her is still high, but the result is not always obvious. The situation has changed. In General, of course, the coronavirus is better than war.

- How the consequences will affect ordinary people?

- Unlikely to be a new profession. But exactly what will disappear. It will be a very strong impact on the academic and expert community, the services market in General. Increase the degree of virtual communication, when you can almost touch the person, but it really is there. Specialists in the virtual sphere will be in demand, though, and will get under reduction of salaries as programmers.

But it will give impetus to the development of artificial intelligence.

- What do you mean by "boost"? Some experts think that the entire response to the epidemic, the whole world hysteria and was organized by the artificial intelligence. We have many major banks and industries are making decisions for artificial intelligence. And it is made in the same place, we will not show new York and California. Their underlying algorithms are unknown to users. And given that the decisions to increase corporate profits, creating artificial intelligence, the question "Who benefits?" is no longer relevant. Power will shift from States to corporations. Moreover, the government did not even notice. And will assume that is still at the helm. She will have to make their own decisions, but they will podsazhivaetsya regardless of their will. And most people will feel nothing but reduce the standard of living, which will be to rising prices and falling wages.

THE RESTORATION WILL BEGIN IN MAY

In 2014, our people were buying TVs and cars, that buckwheat and canned meat. Seriously priorities have shifted...

Muscovites have started to buy Essentials.

Is not out of the realm of priorities. If the crisis is serious, you're still on the whole of his period itself, or buckwheat, or paper will not provide. But if it is mild, there is something to worry about. And that is what he is, a burglar has no intention to kill, he has other problems. Therefore, no global problems with the goods will not. Maybe time to disappear foreign products. But just because of the disruption. Anything critical will not be lost.

But it is unknown how long the crisis will last.

- On the basis of political sayings "the Fish not swim backwards", some time will be spent on hard measures. Somewhere in may will be restored theatres, part of the air traffic... the Situation will slowly improve, although this is more my hope than expert opinion. I can tell you exactly what this type of the epidemic continue year. By January 2021, the mankind will develop immunity to the virus. But the very purpose of the epidemic - change structure in the world - time will need more.