Almost the entire world may switch to renewable energy by 2050 Print version Material posted: Publication date: 30-08-2017
The researchers say that if we really wanted, then by 2050 nearly three quarters of countries would be able to switch completely to renewable energy. Such conclusions were made in the framework of a large research project of drafting a global roadmap to 2050.

In it, researchers describe how by this time mankind will be able to move to completely free from harmful emissions future, create millions of new jobs, save trillions of dollars spending on health care and projects for climate protection and help to save our planet from global warming.

Calculations conducted by the group of nearly 30 experts based on the assessment of the capabilities of 139 countries in the transition to 100% use of wind, water and solar energy within the next just over three decades. Such large-scale changes in our energy infrastructure goes far beyond the level advocated by the Paris agreement (COP21) on climate, but the researchers say the existence of compelling reasons for that transition to renewable energy sources should be implemented sooner rather than later.

"The work shows that the level of benefits that we receive, is so great that we should as soon as possible to make the transition to wind, water and solar energy," commented mark Delucchi from the University of California, one of the participants of the study. 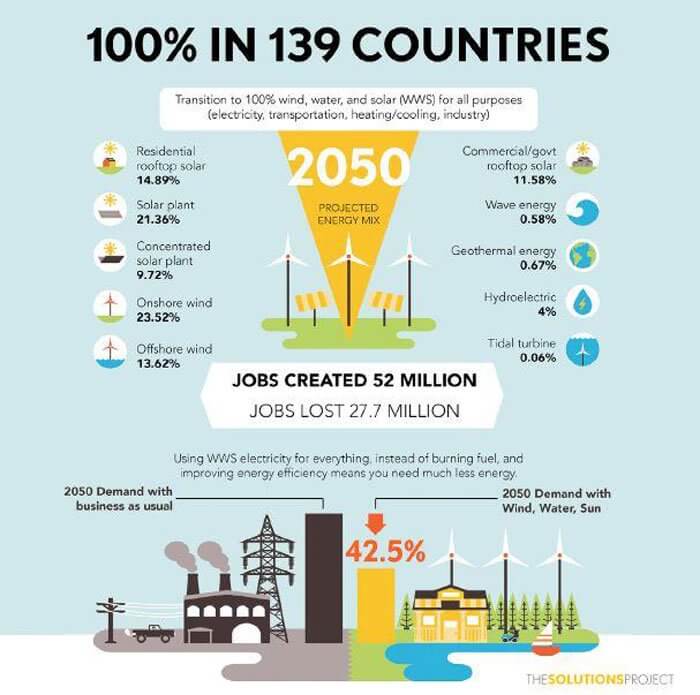 This will not only create new jobs in the industry of renewable energy production (expected growth is 24 million jobs), but also increase the level of our health clearly suffers from recycling, use of fossil fuels and their resulting pollution. According to forecasts by 4.6 million people each year will also be reduced and the amount of mortality due to air pollution. But perhaps the most important, if you look at the question dolgorukovoj term, is that the transition to renewable energy will help to slow down the increase in the average temperature of the planet.

This study, but in the initial form was presented at the Paris summit in 2015. The project Manager is mark Jacobson from Stanford University.

"Most striking about this study is that each country that we studied, has the necessary resources for self-sufficiency", — said Jacobson in an interview with IEEE Spectrum.

"However, in a few cases, when it was about small countries, but with a dense population may require importing energy from neighboring countries. Alternatively, you can use the increased number of energy extracted from the coastlines".

Large countries have large areas of land and therefore have greater flexibility in selecting suitable sites for construction of pump stations – solar, wind or marine. Despite the fact that the creation of a road map for 139 countries in itself is a very ambitious initiative, the researchers do not plan to dwell on it.

"Next we plan to develop roadmaps for each individual city where we specify how it will be possible to ensure 100 per cent transition to renewable energy sources," added Jacobson.