The planet's gonna fry or drown? Climate scientists are willing to tell the truth Print version Material posted: Publication date: 18-10-2018
How to change the planet by heating the atmosphere by half a degree by 2100 — this is dedicated to the report of the intergovernmental panel on climate change (IPCC), which publishes on Monday 8 October. Leakage drafts and experts ' statements allow us to judge his main conclusions: over the next ten years, several island countries will go under water, the Arctic will continue to be free of ice.

Three years ago at the UN talks on climate parties to the Paris agreement, we agreed to do everything possible to prevent the heating of the atmosphere by half a degree Celsius relative to the preindustrial temperature level.

The countdown goes from the mid-nineteenth century, when the industry has not yet developed to the extent that, as scientists assume, to affect the Earth's climate. Since the air temperature increased by 0.8-1.2 degrees. Linked to this the melting of glaciers and rising Global sea level. Now this affects island States such as Kiribati, Nauru, Tuvalu, Marshall Islands in the Pacific ocean.

According to the forecast of the world meteorological organization, Kiribati will go under water in 30-60 years.

Small island States insisted on the inclusion in the Paris agreement of a clause on combating the increase in temperature by half a degree. Can this be done and how? And if not, what will happen to the planet and its inhabitants? These questions will be answered by the IPCC special report (IPCC), the final version of which summary discussing all week in South Korea. 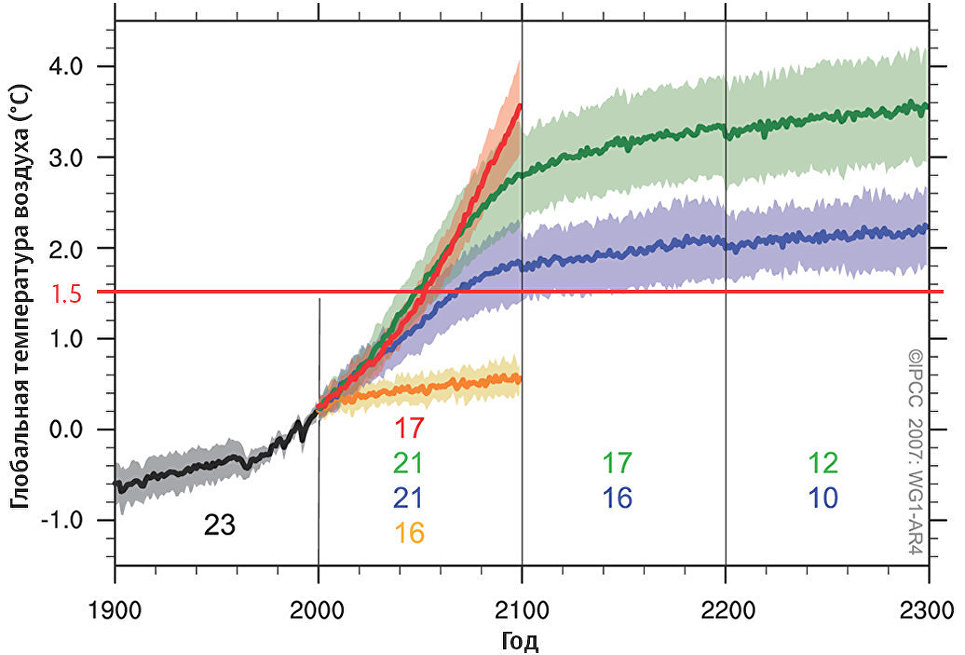 © IPCC 2007: WG1-AR4
Scenario, heat the atmosphere up to the end of the XXI century and beyond

"Chief, all is lost"

In preparation of the report media, citing close to the IPCC experts, announced that it will produce a sensation, will cause very mixed feelings, sharp criticism. Aggravate the situation of the interview where it was mentioned that States will recommend to completely stop emissions of industrial greenhouse gases in the atmosphere, radically change the way of life of the citizens. In General, "the world will never be the same."

"Now in the media quite a lot written about that report is an information bomb, saying all is lost, the goal in a half of a degree is not achieved, the world faces a global climate disaster. Everything is terrible. Passed the point of no return. Rhetoric sensationally disastrous, and the audience does not perceive it and do not respond," — said Alexei Kokorin, Director of the program "Climate and energy" world wildlife Fund, during the webinar for environmentalists.

According to him, such statements are in principle wrong. For Kiribati, perhaps the point of no return is passed, but there are places where the impact of climate change small, they are far from the centers of the weather, and talking about serious climatic damage there before. For the human species heating of the atmosphere a half a degree, also cannot be considered a point of no return.

"The situation is more complicated", — said the expert.

In his opinion, the community itself, the IPCC avoids alarmism and configured to start thinking practically: any scenario, we should follow and how to adapt to climate change?

The report is a very high quality, approximately 700-page review of the scientific literature made by members of the IPCC from many countries (more than two hundred authors). Among them three Russian scientists. Russia in this organization is Sergei Semenov, head of the research Institute of global climate and ecology named after academician Yu. a. Izrael.

The IPCC does not conduct independent scientific research, its participants, analyzes the published data and the opinions of generally recognized experts in their fields. Draft versions of the report were circulated to the experts. They received approximately 42 thousands of comments, and the authors are obliged to consider each. From the document will make 15 pages Marc — especially for politicians. This is the final summary of the report discuss in South Korea.

"This is strictly a scientific review, prepared for the rigid rules. Considered only publications in scientific journals. No materials from organizations promoting the interests of business, politicians and environmentalists, was not used. This dry exposition of scientific knowledge, facts that merely need to take note," — emphasizes Kokorin.

According to him, the report "about one and a half degrees" confirms the findings of a strong anthropogenic influence on climate, which were included in previous assessment reports of the IPCC.

From the document follows that the problem of human influence on the climate should be taken seriously. Emphasizes the difference of damage from climate change in different regions of the world. The most vulnerable Western and southern Africa, Southeast Asia, some areas in Central and South America, the Mediterranean was also attributed to the troubled regions.

In General, the climatic damage does not depend on the wealth of a country. However, States with poor economies, poor people will suffer. There may be a shortage of fresh water and food.

One and a half better than two

To represent the situation clearly, the authors of the report analyzed the difference between what will happen to the climate by heating the atmosphere and a half and two degrees Celsius by the end of the XXI century. The second version of the climate extremes — droughts, heat waves, floods — can be stronger and more often. Although an accurate forecast is difficult to give.

At one and a half degrees will die in half the plant species than in two. Health risks, supply of food and water security, infrastructure will be less.

Even in the most optimistic version of the end of the century we can expect melting of glaciers of Antarctica and Greenland, which will raise Global sea level by meters. Sinking some island Nations will go under water coastal areas, affected countries living in agriculture, indigenous peoples of the Arctic coast.

The increase in average global temperature of the surface layer air on a half of a degree will happen by 2040 if the rate of industrial emissions of greenhouse gases in the atmosphere will remain at current levels. This scenario is outlined in the draft summary report, which leaked to media in June this year.

One of the expected scenarios to the year 2100 — heating of the atmosphere by 2.7 degrees from pre-industrial levels.

It is expressly agreed that all evaluations and conclusions of the report with different probabilities.