Print version Material posted: Publication date: 05-06-2018
Recently, the Chinese Ambassador said that Kyrgyzstan needs to pay off the debts. But whether China is condescending and off if the debts of partner countries or demanded in response to some concessions?

China finances projects in 68 countries in Asia, Africa and Europe with a total value of $ 8 trillion. In a recent study of the analytical center for Global Development (USA) the experts reviewed the investment policy of China in which the Chinese lend to their partners.

Fellow of Kyrgyzstan on the Chinese debt

The result of this study, analysts found that eight countries as a result of participation in these projects become financially vulnerable, among them was and Kyrgyzstan, also in the group of "risk" Djibouti, Laos, Maldives, Mongolia, Montenegro, Pakistan, and Tajikistan.

At the end of March this year, the public external debt of Kyrgyzstan to China (China Eximbank) has made 1 billion 709 million dollars. As it turned out, over the last 10 years, the debt to China has increased almost 200 times. Including 386 million dollars were taken to modernize capital purposes. With the return of the country have almost half a billion dollars.

Recently, the Network appeared the video, as the activists suggest that people to pay off the foreign debt to the largest creditor — China. Concerned people are worried that the borrower can get part of the land instead of debt. So they offer to residents to"chip in" and pay the debt.

Earlier Kyrgyzstan forgave the debts of Turkey, Germany, and a strategic partner — Russia. China is also one of the main partners of the country.

In March, the Ambassador of China in Kyrgyzstan Xiao Qinghua said that the duty of the CU to China will be paid according to the agreements.

"China has provided concessional loans. We know that Kyrgyzstan has learned from them. These debts can be written off only on the basis of the agreement. But the Chinese side does not consider these issues (the write-off. — Approx. edition)", — he said.

Edition Sputnik Kyrgyzstan decided to investigate me whether the government of China the debts of partner countries and what happened to those who could not pay. The data is taken from public sources.

Money in exchange for a major port 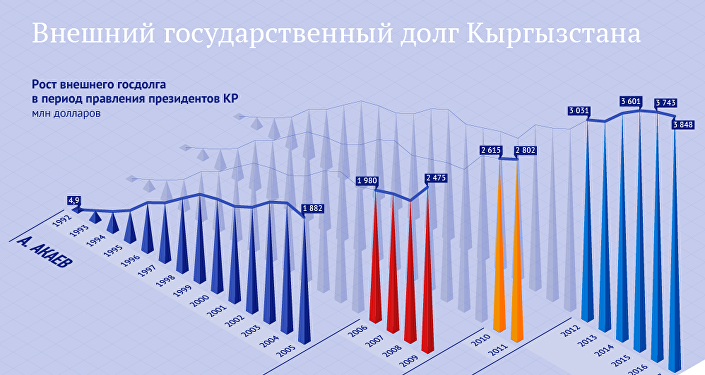 How changing debt of Kyrgyzstan under different presidents

According to the IMF, the external debt of Sri Lanka at the end of 2017 was 48.3 billion dollars, or more than 80 percent of GDP. China's share was approximately $ 8 billion. However, as writes the newspaper the New York Times, the Sri Lankan authorities were not able to repay China, and the result is transferred to the major port of Hambantota to the Chinese state-owned enterprise China Merchants Port Holdings. Gave him a controlling stake in the management company "Hambantota" and the port to lease for 99 years. However, this has not repaid fully the debt — China just only $ 1.1 billion. The American edition has called "the debt trap".

Hambantota is considered one of the deep-water ports in the crosshairs of world trade routes through the Indian ocean. It is noted that it is indispensable for the energy security of China, because two thirds of imported oil through the routes near this port.

As reported by CNN, China is planning at the expense of loans the island nation of Vanuatu to establish a military presence in the South Pacific.

According to the channel, the Chinese side provided a loan in the amount of $ 270 million for the construction of a port on the island of Espiritu Santo in Vanuatu and the implementation of other major projects. According to experts, this loan is about half of the external debt of the Pacific States, or about one-third of the country's GDP.

If media reports are true, at a distance of 2 thousand kilometers from Australia to appear a naval base of China, marks the channel. As it became known, Australia is against Chinese military plans.

Debt in exchange for a base

The Chinese side in the situation of Vanuatu relies on its experience with the use of "debt traps". At the moment, China has had one foreign base in Djibouti in the horn of Africa, next to an important thoroughfare on the border between Asia and Europe. As noted by Asia Times, the military presence in the East African state the government of China is achieved at the expense of total loans, which made up half of the GDP of Djibouti.

As predicted the Center for Global Development, China's share of the national debt of Djibouti in the coming years will increase from 82 to 91 percent.

In 2015, the government of Pakistan gave the Chinese state company "China Overseas Port Holding" lease for 43 years of the port of Gwadar to create a "special" economic zone, writes Asia Times.

It is noted that Islamabad owes Beijing almost 16 billion dollars. Under a long-term deal China will receive 91 percent of the profits from the revenues of the port and 85 percent from the surrounding "free zone".

Gwadar is the southern end of the Sino-Pakistani economic corridor, which originates in the Xinjiang Uighur Autonomous region of China. This ambitious project, whose total cost is estimated at $ 46 billion, will link China with the Middle East, which is rich in energy resources. The corridor will be an alternative to the Malacca Strait, through which currently runs more than 80 percent of China imported oil.

CHP in exchange for gold mine

A closer example — both geographically and financially — is in Tajikistan. In April of this year it became known that the authorities of this country gave China gold mine Top Kumar in exchange for the construction of thermal power station "Dushanbe-2". The plant cost nearly $ 350 million, of which the lion's share ($330 million) loaned it to China. Along with this, debt to China and Tajikistan amounted to over $ 1.2 billion.

According to the Main Department of Geology under the government of Tajikistan to develop a mine in the Sughd region will be the company TBEA, which built the CHP. The company will mine gold at the Deposit until full payment of the funds invested in construction. After repayment of the debt will be signed a new contract on new terms.

Write-off of in exchange for major agreement

In October 2016, China forgave Cambodia's debt of 90 million dollars in exchange for the 31 conclusion of the agreement. This allowed the country to borrow new loans for a number of projects that are implemented by Chinese companies. Other agreements allowed to increase the mutual trade turnover. According to the IMF, while China accounted for 43 percent of the total debt of Cambodia.

In 2002, the Chinese government decided to help the government of Hamid Karzai and has written off debts to to enable Afghanistan to cope with the crisis caused by the consequences of the reign of the Taliban regime and the conduct of American anti-terrorist campaign. The specific amount of the debt remains undisclosed, but it raised loans from the 1960s until 2002.

In 2007, was written off the debts of the 49 most underdeveloped and poor countries of Asia, the Caribbean and the Pacific. Among them were African States. Then repayment of the touched material and financial resources that the Chinese government had provided since 1950.