After a rapid increase in their military expenditures over the past few years, in 2010 China has raised them to 7.5%, for the first time in nearly 21 years, the increase is not expressed in the double digits. Although the reasons for this are many, but the Chinese government took this opportunity to announce his peaceful intentions and to stress that always tried to limit military spending and set defence spending at a reasonable level. The people who developed the foreign policy of China and its political establishment had long tried to convince the world that the rise of Beijing would be peaceful, that China has no expansionist intentions, that it will be a different type of great power

Of course, the nature of statehood makes such claims are nonsense, but what is most surprising - Western liberals tend to take them at face value. There is a whole industry in the West, which has been trying to convince us that China is actually a new and distinctive type of the great powers, and that, if the West could simply give China a stake in the established world order, the rise of Beijing would not have created complications.

Today one of the most prominent political intellectuals of China advocated the establishment of military bases abroad. Shen Dingli, Professor, University "Fudan in Shanghai, asserts that “it is wrong for us [China] to believe that we have no right to create bases abroad”. He argues that the real threat to China represent not terrorism or piracy, and the ability of other States to block trade routes of China. That is the biggest threat. To prevent such a development, China, as Shen asserts, needs not only in the Navy of the high seas, but also “overseas military bases to cut costs.”

Of course, Shen turns his thoughts in widely used by all diplomats in the world wrap, claiming that the establishment of such military bases overseas would promote regional and global stability. It is a familiar diplomatic figure of speech that is easy to recognize the other superpower.

As China becomes the world power, it will expand its military presence around the world, in the same way as did the other powers - the United States, the base of which is surrounded by China. The rapid expansion of military and naval capabilities of China is a classic manifestation of great power status. New naval strategy of "far sea defense lines" enables Beijing to project its power in key regions of the World ocean, including, and most significantly - in the Indian ocean.

The expansionist ambitions of China, in fact, have long been evident. China puts the control of naval facilities along crucial chokepoints in the Indian ocean, he does so not only to serve its economic interests, but also to strengthen its strategic presence in the region. China is aware that naval strength will give it strategic leverage to becoming a regional hegemon and a potential of a superpower.

Increasing China's dependence on Maritime space and resources is reflected in the desire to expand its influence and, ultimately, become the dominant force in the strategically important Indian ocean region.

The growing demand of China in bases in the Indian ocean is a response to its perceived vulnerability, given the logistical difficulties that face the country due to the remoteness of China from the waters of the Indian ocean. However, China is consolidating power over the South China sea and the Indian ocean, keeping an eye on India, as it follows from a secret Memorandum issued 15 years ago by the head of the General logistics Department of the people's liberation army of China: "We can no longer consider the Indian ocean as only an Indian.... ... We take into consideration the armed conflicts in the region."

The growing naval presence of China in and around the Indian ocean region, particularly noticeable, for example, on Hainan island in the South China sea, concerned about India. In 2008, when China placed their submarines of a class "Jin" (Jin) at the submarine base near Sanya on the southern tip of Hainan island, it has caused concern in India since the base is only 1200 nautical miles from the Malacca Strait, and is the closest access point to the Indian ocean. On the base there are underwater tunnels to exit into the sea, greatly complicating detection of submarines.

The concentration of strategic naval forces at Sanya could encourage China on the path of strengthening its control over the surrounding Indian ocean. The presence of tunnels for secure access to the sea is particularly concerned about India, since the base is of strategic importance in the Indian ocean region, it allows China to control three critical points in the Indian ocean – Bab El Mandeb, Strait of Hormuz and Strait of Malacca. Particular note must be the method of action of China, which was called "string of pearls" and which greatly expanded the strategic options for China in the "backyard" of India.

This "string of pearls" consists of bases and diplomatic ties. It includes the port of Gwadar (Gwadar) in Pakistan, naval bases in Burma, electronic intelligence base on the Islands in the Bay of Bengal, funding construction of a canal across the KRA isthmus in Thailand, a military agreement with Cambodia and buildup of forces in the South China Sea. This "pearl" is to help build strategic ties with countries along the Maritime transport corridors from the Middle East to the South China sea to protect China's interests and its energy security. Some of the early statements turned out to be false, as it was a statement on the alleged Chinese naval presence in Burma. In 2005 the Indian government, for example, had to admit that the allegations that China is creating a naval base on the Cocos Islands, were incorrect and in fact, no bases in Burma no.

However, the thrust of Chinese promotion in the Indian ocean is becoming more apparent. The Chinese may have no naval base in Burma but they are involved in the modernization of infrastructure in the Cocos Islands and can provide some limited technical assistance to Burma.

If you consider that almost 80% of the oil China gets through the Strait of Malacca, given its reluctance to rely on us naval power for unhindered access to energy resources, it becomes clear its desire to increase its military capabilities at key points of transportation routes from the Persian Gulf to the South China sea.

China is courting other States in South Asia, building container ports in Chittagong (Bangladesh) and Hambantota (Sri Lanka). Consolidating its access to the Indian ocean, China has signed an agreement with Sri Lanka on the financing of construction of development zone "Hambantota" on the southern tip of Sri Lanka, which includes a container port, a bunker system and an oil refinery. China's actions in Marao in the Maldives has also caused alarm in new Delhi. 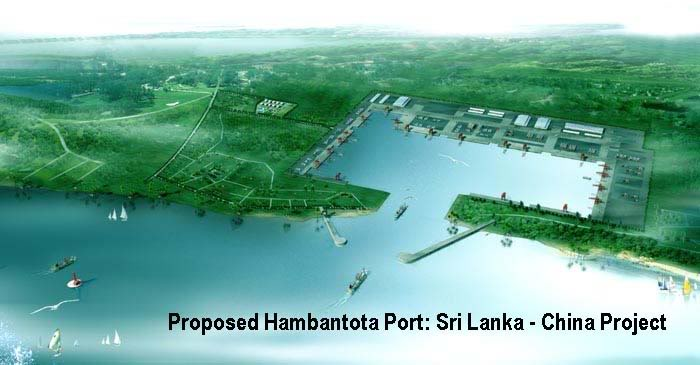 The involvement of China to build a deepwater port "Gwadar" on the southwest coast of Pakistan has attracted great attention due to the strategic location of the port, approximately 70 kilometers from the Iranian border and 400 kilometers East of the Strait of Hormuz, the main route for oil resources. It is assumed that this has enabled China to establish a "listening post and listen" to ”monitor us naval activity in the Persian Gulf, Indian activity in the Arabian sea and future us-Indian Maritime cooperation in the Indian ocean”.

Although the naval capabilities of Pakistan's own and do not constitute difficulties for India, the combination of Chinese and Pakistani naval forces can indeed be a huge problem.

Recent words spoken in Beijing, that China intends to establish military bases overseas to counter American influence and exert pressure on India, was interpreted in certain circles in new Delhi as a hidden allusion to China's interest in securing a permanent military presence in Pakistan. Although politically impossible for the Pakistani government to openly allow China to set up military base, new Delhi fears that Islamabad might allow Beijing to use its military infrastructure and without any publicity.

You can, of course, to explain the construction of ports and infrastructure of China as a purely economic and commercial activities, but regional and global powers such as USA, Japan and India of course consider the total amount of diplomatic and military efforts of China in the Indian ocean as a demonstration of the rising power of its competitors. Moreover, most Chinese naval facilities in the Indian ocean by their nature are dual purpose, and no serious strategy can not take into account their possible military use.

Even if not to take into account the expansionist military budget of China and its intensive search across the globe of energy and other natural resources, it is clear that China has formed a multifaceted marine economy, has created one of the world's largest merchant fleets with corresponding ports, transport and shipbuilding infrastructure. Of course, the Indian ocean plays an important role in Chinese efforts to occupy a position as a leading Maritime power in the region. And this is reflected in the Sino-Indian rivalry for influence in the Indian ocean and around him. Despite significant improvement in Sino-Indian ties since the late 1990s, the relationship remains competitive, and China has succeeded in keeping India within the borders of South Asia, having established a close relationship with key neighbors India, especially with Pakistan.

The notion that China aspires to naval domination of the Indian ocean, is far-fetched. However, China certainly wants to play a greater role in the region, to protect and promote their interests, especially commercial interests, as well as to counter India. But given the immense geographical advantages that one enjoys in the Indian ocean, China will have great difficulties in competition with India in the Indian ocean region.

Today, even the challenge of protecting sea lanes remains a major challenge for the Chinese Navy. However, the steps taken by China to protect and promote their interests in the Indian ocean region, are causing concern in the Indian political circles, bring to life the classic security dilemma between the two Asian giants. And fears of India, and the growing naval presence of China in the Indian ocean, determined the Indian naval doctrine. Tension is a permanent feature of such emerging strategic relationship, which were emphasized by the incident in January 2009, when the Indian submarine class "Kilo" and Chinese warships EN route to Gulf of Aden for patrolling protivovirusnogo, made some maneuvers in order to identify weaknesses in sonar systems, sonar, Sonar, (eng. sonar, acronym from SOund Navigation And Ranging) — a means of sound detection of underwater objects using acoustic radiation – approx. perevodika.ru) each other. Chinese media reported that their warships forced the Indian submarine to surface, these reports were challenged by the Indian military. Without strict control environment, the potential for such incidents, which can become serious, it is high, especially because Chinese-Indian naval rivalry is likely when Indian and Chinese navies will operate away from its shores.

In its development, China is just following in the footsteps of other world powers who have established military bases abroad to protect their interests. There is only one type of a great power and only one type of behavior of the great powers. China will be no exception to the rule; great power is necessarily expansionist.

The sooner the world recognizes this, the better it will be for global stability.