Print version Material posted: Publication date: 14-09-2017
Under the glaciers of Antarctica could be hiding a secret world of animals and plants, including unknown species, scientists say. Caves, hollowed out steaming active volcanoes, is very light and can heat up to 25 degrees Celsius, creating ideal conditions for the prosperity of the ecosystems flora and fauna deep under the frozen surface.

Although most of the DNA was similar to that found in mosses, algae and invertebrates across Antarctica, not all the sequence has been completely identified.

"The results of this study reveal to us the exciting possibility of life under the Antarctic ice — could be new species of animals and plants," says the scientist. "The next step is to go and see if we can find the colony living under the ice of Antarctica". 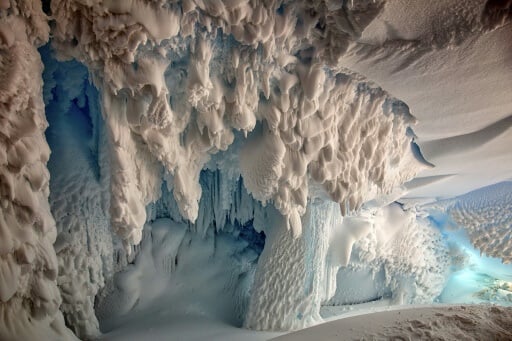 Despite the freezing temperatures on the continent, Frazer said that the heat coming from volcanoes, can make the cave quite hospitable, warm enough to "walk t-shirt", with a light filtration at a depth where the ice is thinnest on top. In Antarctica there are many other volcanoes, so the under-ice cave system must be quite common.

"We don't know how many cave systems there are from Antarctic volcanoes and how they can be interrelated. They are difficult to find, hard to get into them and explore, too."

A study published in the international journal Polar Biology notes that in Antarctica there must be at least 15 current or recently active volcanoes, and that their number is not limited. While scientists know very little about life in the ice-cave systems, which can be quite diverse and complex.

"Our results emphasize the importance of studying these cave systems in more detail, in spite of field problems associated with this event — to confirm the presence of live microbiota," say the researchers.