Demographer Vladimir Shkolnikov: a Real picture of how Europe is pandemic coronavirus, we will see only a month and a half Print version Material posted: Publication date: 13-05-2020
The observer of "KP" Alexander Milkus talking with a specialist on the mortality of the Institute for demographic research max Planck, scientific Director of the International laboratory for research of population and health, Higher school of Economics.

- Vladimir Mikhailovich, after reading dozens, if not hundreds of studies on mortality during the present pandemic I is the only conclusion that an objective picture of what is happening we do not know. Recently there was an article in the Financial Times, which States that statistics of deaths from the coronavirus in the world is underestimated on average by 60%. How can that be?

- Article in the Financial Times is very good. It uses the correct method of assessment of losses from the epidemic, which does not depend on extraneous factors. This assessment of the so-called excess mortality.

- What is excess mortality?

And then it turns out that the "excess" death is just due to the coronavirus?

- Yes, with a direct effect, and indirect.

For example, decreases the normal activity of health in connection with the coronavirus. Doctors are diverted to the fight against the pandemic and fold diagnostic procedures, elective surgery. It also causes deaths. Not directly from the coronavirus, and due to the fact that people with other diseases don't receive timely help.

On the other hand, reduces the intensity of traffic on the roads, hence, the death rate from accidents.

There is another reason for inaccurate estimates. Those who do not always understand what indicators you're dealing with. For example, the UK and many other countries consider only the death of people with a diagnosis of "coronavirus", which are in hospitals, hospitals. And because people are dying in nursing homes, on the street and at home. And not everyone was diagnosed with "coronavirus". Sick - died - buried.

The curve is not taken

- Many of the "analysts" themselves display graphs of morbidity and mortality in the United States, Spain, Italy, Russia, and comparing the curve so went this way. Well, and draw conclusions about the prevalence of the disease - say, we pass peak (or pass) as well as Spain. In General, it is possible to compare these graphs?

- With great difficulty. The fact that the number of so-called confirmed cases COVID-19 and the number of deaths from COVID-19 is influenced by additional factors. Based on what these numbers mean? On testing. But different countries have different testing strategies. In some countries, testing record, as in Iceland, where he checked almost everyone. In other very wide, as in Switzerland, in USA, and in Russia. And in some countries, e.g. in France and the UK (and Italy and Spain at first) testing was carried out very little. That is, how many cases you find out depends on how actively you are testing.

As for deaths, there are also two main principles, which are very different from each other. One thing – check the death from coronavirus, where the coronavirus is the main cause of death and the other death with the coronavirus. That is, death from virtually all causes, except obviously not related to him - like a trauma, for example.

That is, when a person has some chronic illness, but they are exacerbated by the coronavirus, and he died.

Yes. In one case, will be dealt with, whether the coronavirus main cause or just a concomitant, and put the primary cause of death, as is done, for example, in Germany (and in Russia, perhaps). In other cases (e.g. in Italy, Belgium, Spain) if revealed the presence of coronavirus – this means that is likely to be recorded death from the coronavirus. 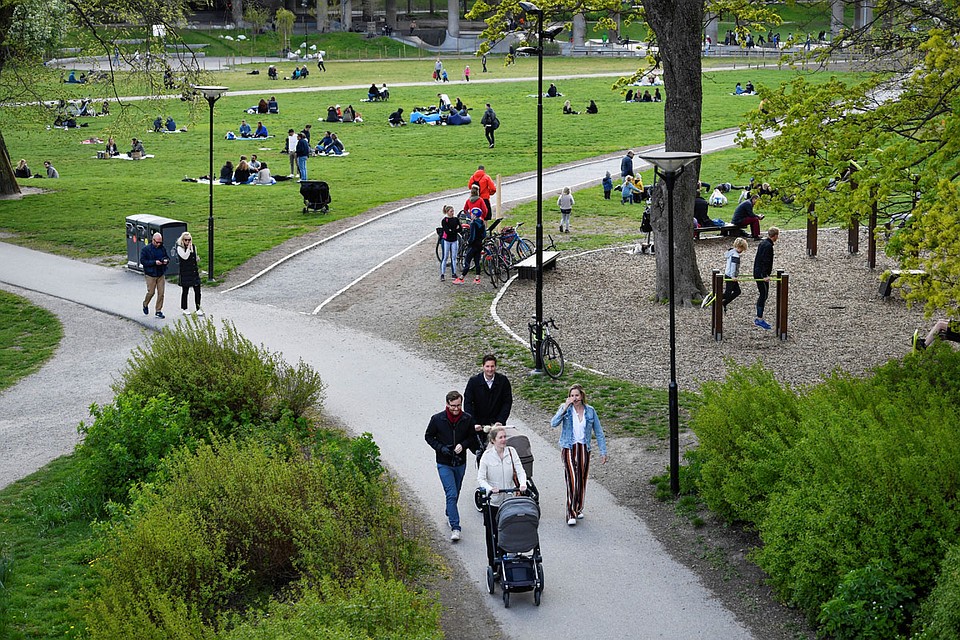 Policy measures to combat the epidemic varies by country. Here Sweden stands out because she not introduced some measures which in the West are called the lockdown - that is, it did not stop economic and business activities.Photo: REUTERS

- It turns out that we can't see on American or Spanish charts the spread of the disease and to say that we will have just over two weeks, and we'll go the same way?

- So. Using these graphs, you can see changes within the same country. Because, as a rule, inside the country the regime of registration of morbidity and mortality, which was yesterday, most likely, continues tomorrow.

Although – very roughly – can be understood that, for example, in Spain the level of the epidemic is much higher than in Finland.

And there is a lag with the reports of deaths in hospitals among people with COVID... We are in England conducted a study and found that the data of deaths from COVID show a steady level, and in fact in hospitals since April 8, is reduced.

- Yes, and here is the history with France, which initially believed the death rate from COVID only in hospitals, and then add on death in nursing homes and the graph went up sharply.

And this is another proof: to compare graphics is not worth it.

There, in Sweden and Belarus?

- In many countries there are so-called kovid dissidents. These are the people who believe that the noise around coronavirus inflate artificially and absolutely nothing. And they have such an argument: look, Sweden is not closed, Belarus is not closed, Turkmenistan is not closed, and they are fine.

- Policy measures to combat the epidemic varies by country. Here Sweden stands outbecause she not introduced some measures which in the West are called the lockdown - that is, it did not stop economic and business activities. However, there were several restrictions. The elderly should be at home, all have to observe social distancing, wearing personal protective equipment. This is not to say that Sweden really is lossless, there is excess mortality. On an annual basis (I've estimated roughly) about 2.8%, whereas in countries where the epidemic is minimally represented – and this is Finland, Austria - in the area of 1% or less.

- That is really the Finns are pandemic with less loss, than Sweden?

- A difficult question. In Sweden, a slightly higher level of urbanization. Sweden and the normal flu is somewhat worse than Finland or Norway. They have average. Worse case of England, Spain, Italy and of course Belgium. But in Germany, according to some estimates, a fairly small loss.

- What can you say about Belarus, Turkmenistan? Do you have data on these countries?

- I'm afraid about Turkmenistan quite difficult to say. Belarus any special account, as far as I know, does not hold.

- That is the real picture, as Europe went through a pandemic, we will get early next year?

- Not quite. The max Planck Institute in which I work, trying to build a database of weekly data for a number of countries. If not the second wave, the final results will be somewhere in the middle of next year. But probably quite accurate assessment we can make in a month and a half.

How are you doing in Asia?

– China now reports that the epidemic they have almost ended?

– From my point of view, Chinese statistics are not trustworthy. They have quite a long time, it was reported that the number of cases 38. And around that number daily was around plus or minus two or three hundred cases. This is impossible! The stats need to go up or down. There are local data of higher quality which experts received by individual hospitals and districts of Wuhan. But there is very little data to draw conclusions about how the country really went through the epidemic.

- Vladimir Mikhailovich, Russia contracted more than two hundred thousand, and Vietnam – 220 people, and no death. How is this possible?

- Vietnam is not among the countries with a clear statistical registration. When you assess the demographic movement in Vietnam (population, fertility, mortality), we use estimates based on indirect data. Therefore, I would not dare to rely on these figures that you gave.

- Discussion of the pandemic usually revolves around the European countries and the USA. And what happens in Africa, in India, in Pakistan, in Australia.?

- Most of the world's population lives in countries with inadequate statistical registration. In countries with strong statistical systems every day we know the number of deaths from COVID, ill. And for the rest... know something to the capitals – for example, Jakarta in Indonesia. And it can be seen that there is a serious epidemic. There are some data for Ecuador, in a couple of cities in India. The real picture of how Europe is pandemic coronavirus, we will see only a month and a halfPhoto: GLOBAL LOOK PRESS

- Not only has coved dissidents, and radicals who say, something that tells us the headquarters for the coronavirus in Russia, it is true, we have much more patients. From the point of view of a specialist as far as the objective data for our country?

- These data are official, they are collected from medical institutions. We have established accounting system diseases, deaths associated with the pandemic. My colleagues at the International laboratory at the Higher school of Economics are trying to assess, using data on the current account of the deaths. But while the findings still have to do before.

- How do you assess the graphic Department of Johns Hopkins?

- This is a wonderful site done professionally. But the root problem in the data itself. Unfortunately, good design does not eliminate on the basis of what indicators are built data.

- Vladimir Mikhailovich, you have been engaged in the study of mortality. Can we say that the current pandemic is one of the most devastating ever experienced by humankind?

- I think this is a very serious epidemic. Already the first accurate measurements that were made on the cruise liner Diamond Princess, showed that the mortality rate from this virus is large and it is from 3 to 10 times the lethality of conventional influenza.

And second. There are so many lethal diseases (and was SARS, and MERS), but the high mortality of these infections were not of the great potential of proliferation, they remain in the region where they occurred. And this virus has very serious potential proliferation.

As for comparisons with past epidemics. Serious epidemics were in 2015, in 2018.

Yes. So in England and Wales , we did a comparison of losses. After three weeks COVID excess excess mortality rate was about 13.5 thousand people, compared with 15 weeks, during which continued the bird flu.

About the same we see in Switzerland, Sweden, Spain, France, Italy, the Netherlands, and Belgium. In those countries where the epidemic has developed, the loss is very serious.